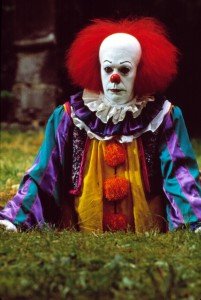 Pennywise the clown from the Stephen King movie IT! Tim Curry 1990

Several years ago I received a phone call from Paddy asking me if I would sew a Hallowe’en costume for him. He wanted to be Pennywise the VERY scary clown from the Stephen King movie IT (watch at your own risk)! He had the teeth, which were the jumping off point as they say in the design world. Well, you may know that I don’t sew for people, I teach sewing lessons BUT even as I was telling him this I was Googling Pennywise the clown thinking, this could be fun! So, of course, I said yes! (and it WAS fun!) 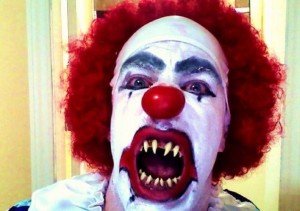 To make the overalls he had purchased some rain gear, overalls and a jacket, but the pants were too short for him. I cut the overalls apart in the middle and inserted a piece that I had cut out of the jacket. If you look closely you can see where the jacket has been inserted into the overalls. The pants ended up being really long, but he had platform boots to make him even taller. (and scarier!) 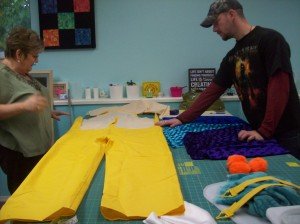 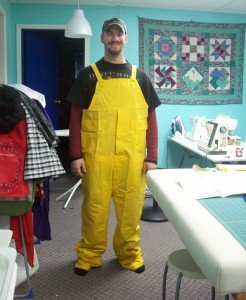 The overalls! If you look closely you can see where I inserted part of the jacket into the pants.

Paddy already had a vest so I dug into my stash and came up with PERFECT (if I do say so myself) fabric to cover the vest in to make it look like the original. 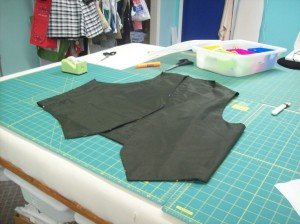 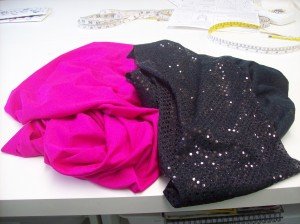 Fabric to cover the vest.

I traced the vest and made an exact duplicate in the sequinned fabric. By the way, this was not true sequinned fabric, but the stretchy Lycra dance wear fabric with shiny “sequins” on it which is much easier to sew. I just laid the sparkly fabric right over top of the vest and sewed around the edges with the sewing machine. After it was in place I cut strips of the fuchsia Lycra and used it to bind, or cover, the edges. 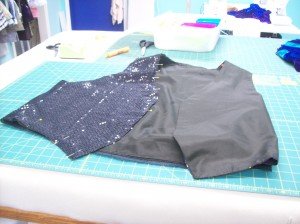 Adding the fabric to the front. 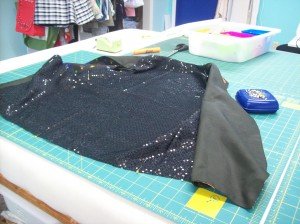 Adding the sequinned fabric to the back.

Paddy was unable to find fabric that looked like the sleeve fabric in the original costume so he found fabric with similar colours and we just made our own! Yup, we cut strips with the rotary cutter and serged the strips all together to make the striped fabric. I even got my youngest daughter, Melanie, on board for that, she did all the serging. 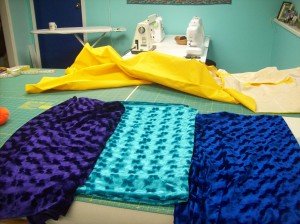 Fabric to make the sleeves. 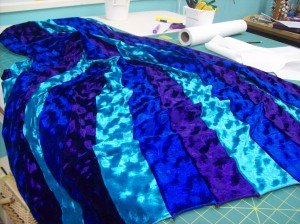 It was challenging to try to figure out how to do the sleeve without making a whole separate shirt. I took an old pattern and changed it up so it made a very full sleeve, and decided to just put the sleeve right into the vest that Paddy had purchased. I made what’s called a muslin (a mock up in inexpensive fabric) of the sleeve to test it out before cutting the fabric. I didn’t want to mess up that hand made fabric! Once I made sure it would work, then I cut out the fabric and created the sleeve. I just sewed the sleeve right into the vest armhole and it worked like a dream. 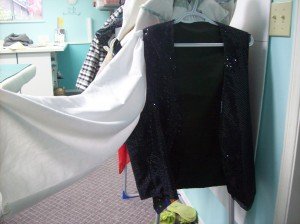 I created a sleeve in muslin first.

After inserting the sleeves into the vest it was just a matter of sewing up the ruff for the neck using some of the sleeve fabric, and gluing on the pompoms and the costume was done! 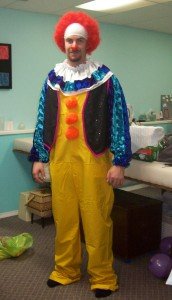 Tada!! The finished costume. Paddy just needs to do his makeup!

Paddy was really instrumental in the creation of this costume! He had the creative idea of using the rain gear for the overalls and he ran around sourcing all of the supplies and helping out where he could! I had the sewing skills and with his vision was able to put it all together.

His Pennywise won TWO First Place awards for “Best Costume” and he was on the Teletron at the game he was at that night!

UPDATE: Paddy wore the costume when he moved back to his home in Ontario, and won TWO more First Place awards! 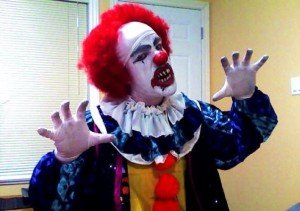 Paddy as Pennywise the clown. 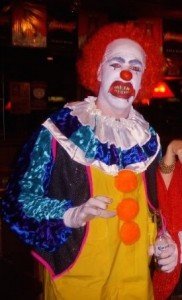 For me, this is the best type of costume! Finding things at Thrift Stores and rummaging in your closet and recreating what you own! Don’t know how to sew? No problem! Come and take one of my beginner sewing classes. You don’t even have to have a sewing machine, I have all the sewing machines, kindly supplied by Brother Canada!

This site uses Akismet to reduce spam. Learn how your comment data is processed.

Sign up for sewing tips & tricks delivered to your inbox!